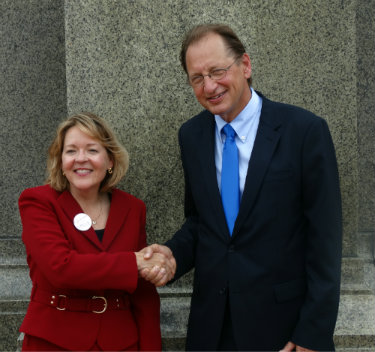 Jane is the Vice President of her family-owned, employee-owned business, B & R Stores, Inc., which includes Super Savers, Russ’s Markets, Save Best, and Apple Market. B & R Stores is one of the very first employee owned companies in the state of Nebraska and is headquartered in Lincoln. In May 2014, B&R celebrated its 50th anniversary of providing service and employment to thousands of Nebraskans.

Jane has been a life-long volunteer. While living in Washington, D.C. after graduate school, Jane volunteered at the Mother Teresa House for Infants run by the Missionaries of Charity for more than 7 years. May 8, 2003 was proclaimed as “Jane Raybould Day” in the District of Columbia by Mayor Anthony Williams for her volunteer work and service to the community.

She is a former board member for the Friends of the Mary Riepma Ross Media Arts Center at the University of Nebraska. Jane was appointed by Mayor Chris Beutler to a two-year term on the Community Health Endowment Board of Trustees. She also served on the Board of Directors of the Lincoln Chamber of Commerce.

Jane Raybould was born and raised in Lincoln, Nebraska. She went to Pius X High School and has an undergraduate degree from Creighton University and a master’s degree from Georgetown University. Lifelong Roman Catholics, Jane and her husband, Jose Herrero, have been married for 30 years. Their two children, Clara and Gabriel, both graduated from Boston University. Clara works for Oxfam America in Boston and Gabriel works for PNC Bank in Washington, DC.

Please check your e-mail for a link to activate your account.